From Homeless Vet to Housed, Supported and Recognized in Vermont 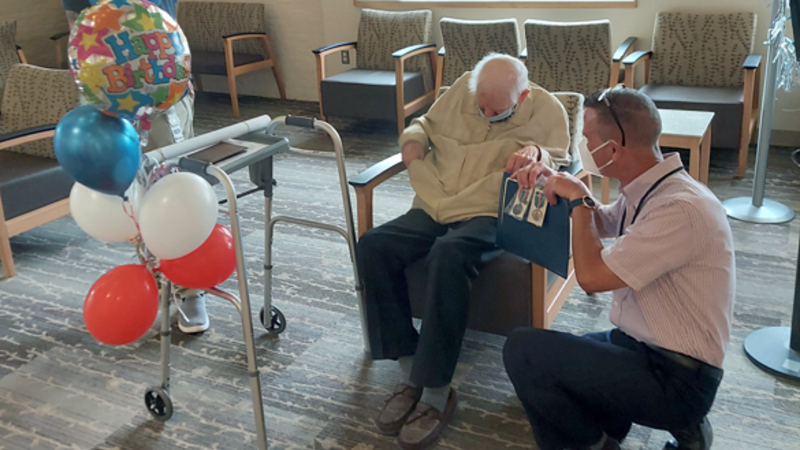 Veteran Joe* stepped up for his country two decades prior to JFK’s famous declaration by serving in World War II. He nobly served in combat as part of the Greatest Generation.

Joe never asked what his country could do for him. In fact, he built a life in Montreal with his wife. They were comfortable there. But then COVID hit and Joe’s circumstances changed. Canada sent Joe, then age 94, and his wife back to the U.S. in September 2020. They landed in Vermont, but sadly, they were homeless.

First, they addressed housing. Our IGH team found long-term lodging at a motel through the Champlain Valley Office of Economic Opportunity. They ensured they had meals that fit their dietary needs. And because they had no income, they were eligible for the 3 Squares Program.

Our team also prioritized getting Joe the VA benefits he earned. He was eligible for VA health care, but had never utilized it before. Our team helped cut through the red tape to get Joe in quickly for VA medical appointments. Further, he started receiving his monthly VA pension.

Small items that we take for granted, like a phone and a computer, were addressed as well. Our team, through its vast community partnerships and resources, helped fix Joe’s laptop and ensured they had a cell phone for making appointments and other necessary calls.

Earlier this month, Joe celebrated his 95th birthday. He happened to have a VA appointment on that same day. The VA staff surprised him with a birthday party. But that wasn’t the only surprise of the day.

Our IGH team on the Vermont Veterans Outreach Program has a heart for serving veterans. This example of helping Joe and his wife go from homeless to housed, supported and recognized, shows their dedication to the men and women who bravely served our nation.

The IGH motto is “Transforming Business. Transforming Lives.” We are so pleased we could work alongside the VA, Vermont Easter Seals Military and Veteran Services, Champlain Valley Office of Economic Opportunity, Supportive Services for Veteran Families at the University of Vermont (UVM), Pathways Vermont and Blue Star Mothers. Together, we transformed Joe’s life and honored his service to our nation in World War II.